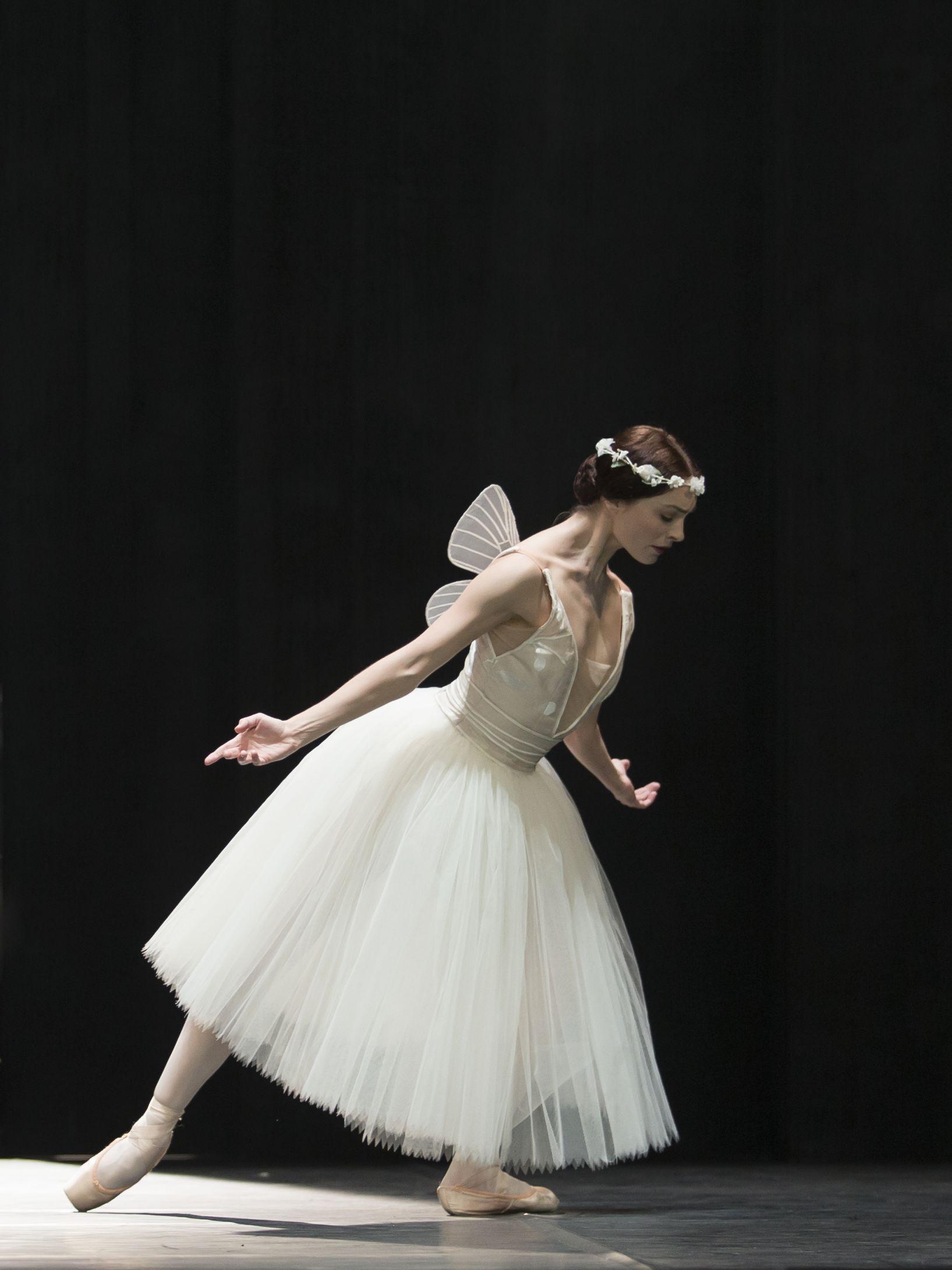 Lifting personal experience to a universal level can make for great art, but lowering the universal to the personal runs the perilous risk of egomania. In this instance it borders on megalomania; the sum of 178 years of ballet art no longer dedicated to the exploration of spleen, dreams, love, and the forces of fate and nature but restaged as an out-of-the-closet confessional.

It is the most powerful moment of the evening as well as the most difficult, both for Nikolaj Hübbe in the role of Madge and for me as a witness, a member of the audience: the ballet master arches his back like a furious, frothing animal. He raises his arms above his head in a cruel gesture, unfolds his hands as poisonous claws. His face contorts, his eyes nearly popping out of his head in a series of uncontrollable and conflicted emotions and expressions. He is a sick rapist, a yearning lover, a man who regains his sanity after committing a terrible deed: young James Ruben lies dead at his feet, destroyed and drawn of all life by Hübbe in a fatal, possessive vampire’s kiss.

The title figure of “La Sylphide” is long dead, and has been carried to the wings as a lifeless puppet by the evil manipulator’s henchmen: no longer the focus point and poetic incarnation of August Bournonville’s Romantic classic from 1836, but just a pawn in a devilish game where only Madge/Hübbe triumphs.

From Universal to Personal

Madge is a marvellous character and the final scene where Nikolaj Hübbe literally steals the picture is an expressive tour de force, possibly the greatest moment the ballet master has had on stage for a long time. Historically, distinguished artists from Gerda Karstens and Niels Bjørn Larsen to Sorella Englund have won great honours in the role. Englund won particular acclaim for the depths she created in her empathic portrait of the Highland witch. In a sense her psychological reading paved the way for Hübbe’s interpretation of the full work, although in Hübbe’s version of “La Sylphide” – featuring Hübbe as Madge and Hübbe as the stager – not only has he turned the supporting role into the main character of the ballet; he has mirrored the entire story in his personal experience. The love interest in the idealistic James that Sorella Englund suggested as a driving force in her portrayal has become the central point of Nikolaj Hübbe’s “La Sylphide.” Madge has changed sex and is now an elegant, affluent older man, whose unrequited, thwarted love for James compels him to kill.

According to Hübbe, James can even be a closeted gay man. The showdown between the Madge and James can also be seen as Hübbe’s personal confrontation with the role of James, a defining part in his dancing career, and the older man’s farewell to young Hübbe, the character dancer letting go of the dancer.

Lifting personal experience to a universal level can make for great art, but lowering the universal to the personal runs the perilous risk of egomania. In this instance it borders on megalomania; the sum of 178 years of ballet art no longer dedicated to the exploration of spleen, dreams, love, and the forces of fate and nature but restaged as an out-of-the-closet confessional.

Bournonville’s libretto and choreographic text doesn’t support a simple sexuality conflict in the place of the essential and infinitely more interesting existential dualism of Romanticism, which “La Sylphide” epitomises: the world of dreams and fantasy as an escape from everyday life and a path to a higher, mystic reality, relayed through James’ journey to the world of his sylph. Many recognise it today.

The Romantic love of nature – of being one with nature, being free – is banned in Hübbe’s world and Bente Lykke Møller’s monochrome, slick designer set. Act one – James Ruben’s house – is dismally grey, with act two – the woods of the sylphs – a three walled world of minimalist blinding white. An oppressive Protestant environment inhabited by stiff, expressionless believers form the contrast to the sterile clinic that sees Hübbe kill off James and the sylph with mental surgery.

Weak on ideas, Hübbe’s production follows a flawed and compromised logic without dramatic coherence. Do Protestants drink alcohol, engage in jolly reels, and welcome soothsayers in their midst?

As four semi-naked spornosexual seducers carry the female victim’s soulless, ethereal body off the stage, I regret that Hübbe didn’t have more to offer and didn’t have the courage to do more than add wear to already worn themes on homosexuality as depraved, misogynistic, and self-destructive. Must James’ longings equate a death wish simply because he is queer?

If you want to explore this avenue, go all the way and make the title character a man. Replace the feminine spirit with a god-like male, an apparition or another androgynous winged creature, keep the duality and dream dimension to create a resonant tragedy with a positive and poetic focus on the beauty of love between men.

Leaving the traditional version of “La Sylphide” intact, Hübbe could also successfully have limited his personal focus to the dilemma of letting go of James: forgetting in-your-face questions of sexuality and taking a more subtle lesson from Sorella Englund, I would like to have seen Hübbe interpret Madge-the-man as a disillusioned Romantic bourgeois taking his spiteful revenge on the power, youth and beauty lost to him in old age and retirement, poignantly and convincingly.

When Hübbe inherited the job of ballet master in 2008, he was all but carried on a golden throne to Copenhagen’s Royal Theatre by a united press corps. Since then he has achieved national and popular fame as a judge on the Danish Strictly Come Dancing (Dancing with the Stars), and the personality cult surrounding Hübbe has been effectively exploited in the Royal Theatre’s marketing strategies: it’s all about Hübbe to the extent that a permanent programme feature is dubbed Hübberiet – The Hübbery. In 2011, the artistic director even survived a toxic coke scandal and a dancer rebellion with a strengthened hand that makes it difficult to challenge his artistic choices and capacity.

Nikolaj Hübbe has made me reflect and appreciate the unique values “La Sylphide” represents. Questioning traditions and convention can be worthwhile and enriching. In this case, however, the consequences of Hübbe’s choices are far-reaching and transgressive: “La Sylphide” is inadequate, morally flawed and a serious threat to the core of a unique cultural heritage.

Bournonville in a coma

In my opinion, “La Sylphide” is in a coma following Hübbe’s extensive intervention. Can it be revived as more than a style when its soul has been eliminated? Can it be more than a reconstruction and a copy if the life and understanding that has been handed down for generations has gone? Is the Royal Danish Ballet in fact anything special and will it enjoy the international recognition it prides itself on having if we have lost the genuine article? One of the things that defined and set the company apart was its capacity to keep its original works alive.

Hübbe has put his name and fingerprint on Bournonville’s “La Sylphide”, “Napoli” and “A Folk Tale,” as well as Petipa’s “La Bayadère.” His “Swan Lake,” created in collaboration with Silja Schandorff, will follow later this season. Although not a choreographer, the powerful ballet master is now the most dominant artistic influence on the Royal Danish Ballet since Flemming Flindt put his mark on the company in the ‘60s and ‘70s, possibly even since Harald Lander in the first half of the last century.

Hübbe is without a doubt a strong director. The Royal Danish Ballet looks confident, technically and stylistically. He is exceptionally careful and meticulous in questions of steps, plastique, musicality and expression and deserves recognition for it.

As a stager, however, Nikolaj Hübbe still lacks conviction and stronger ideas and craft. He would serve his company, his entrusted vocation as ballet master and his reputation better by respecting and preserving the classics, Bournonville in particular. What’s stopping him from developing his creativity freely in other forms?

This website uses cookies to improve your experience while you navigate through the website. Out of these cookies, the cookies that are categorized as necessary are stored on your browser as they are essential for the working of basic functionalities of the website. We also use third-party cookies that help us analyze and understand how you use this website. These cookies will be stored in your browser only with your consent. You also have the option to opt-out of these cookies. But opting out of some of these cookies may have an effect on your browsing experience.
Necessary Altid aktiveret
Necessary cookies are absolutely essential for the website to function properly. This category only includes cookies that ensures basic functionalities and security features of the website. These cookies do not store any personal information.
Non-necessary
Any cookies that may not be particularly necessary for the website to function and is used specifically to collect user personal data via analytics, ads, other embedded contents are termed as non-necessary cookies. It is mandatory to procure user consent prior to running these cookies on your website.
GEM & ACCEPTÈR
Nyt om ballet i din inbox?